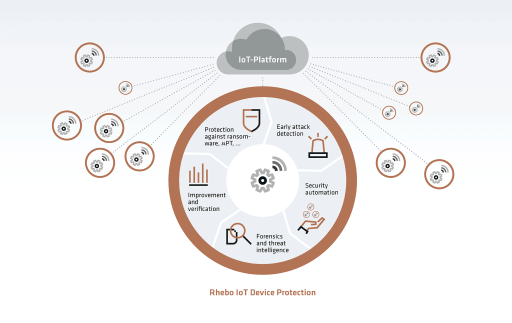 IoT devices are smart and connected but hardly ever secure. Often they are connected to the central IoT platform via private networks or the internet. A compromised device can quickly spread an infection to the entire fleet. Particularly large fleets of connected IoT devices become a risk for operations – because of ransomware, sophisticated attacks, botnets or Advanced Persistent Threats.

Vendors of industrial and distributed IoT devices need an intelligent, automated detection and response system for embedded IoT device security. This system must identify novel attack patterns and must protect the fleet via automated threat mitigation.

The automated threat mitigation policies can be flexibly adapted to any IoT application. Attacks are stopped locally to prevent the spread of an infection. This ensures the security of both the IoT device and the entire IoT network. Furthermore, any technical error state gets reported to the central IoT device management.

Rhebo IoT Device Protection can be operated on-premise or as Managed Detection Response.